"Minor" May Update: Four New Tools, an ARG, and some fixes...

With this update I officially take the Electric Zine Maker out of "early beta" and change it to...

*drumroll*
"a work in progress!"

Yay for weird esoteric versioning systems!
...But seriously tho. It's far along enough now that it's not really *early* beta anymore.

A lot has been going on since the last Electric Zine Maker update. I'm really happy to finally be able to release this one. There are four new fun tools! ...Although this is just a tool update, it feels like a big achievement.

At the beginning of this year I took a step back from the Zine Maker to make an ARG for it. Remember when I mentioned that I wanted the Zine Maker to have a cute little backstory and kind of take place in a fictional universe? Like it's part of a cute fantasy software world? Yes? Ok, this ARG is it.
The ARG takes place on Mackerelmediafish.com. You fill the role of an internet archeologist and explore this abandoned website.
Overall, that's the fantasy realm that the Zine Maker exists in. As I continue to build on it, I'll also build on that fictional part that's set up now. All future art software will be homed there.
You can play the ARG here.
You can also download the entire ARG, open source, here.

This felt important to do because I want software that fills a fictional space. Making art in a digital art tool is a very real form of expression, and I feel like it becomes extra special if you're given the feeling that this art tool is from a fantasy world. 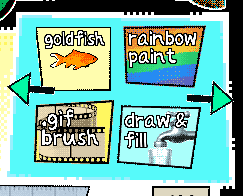 Ok, so now for a list of the new features!
Here they are... 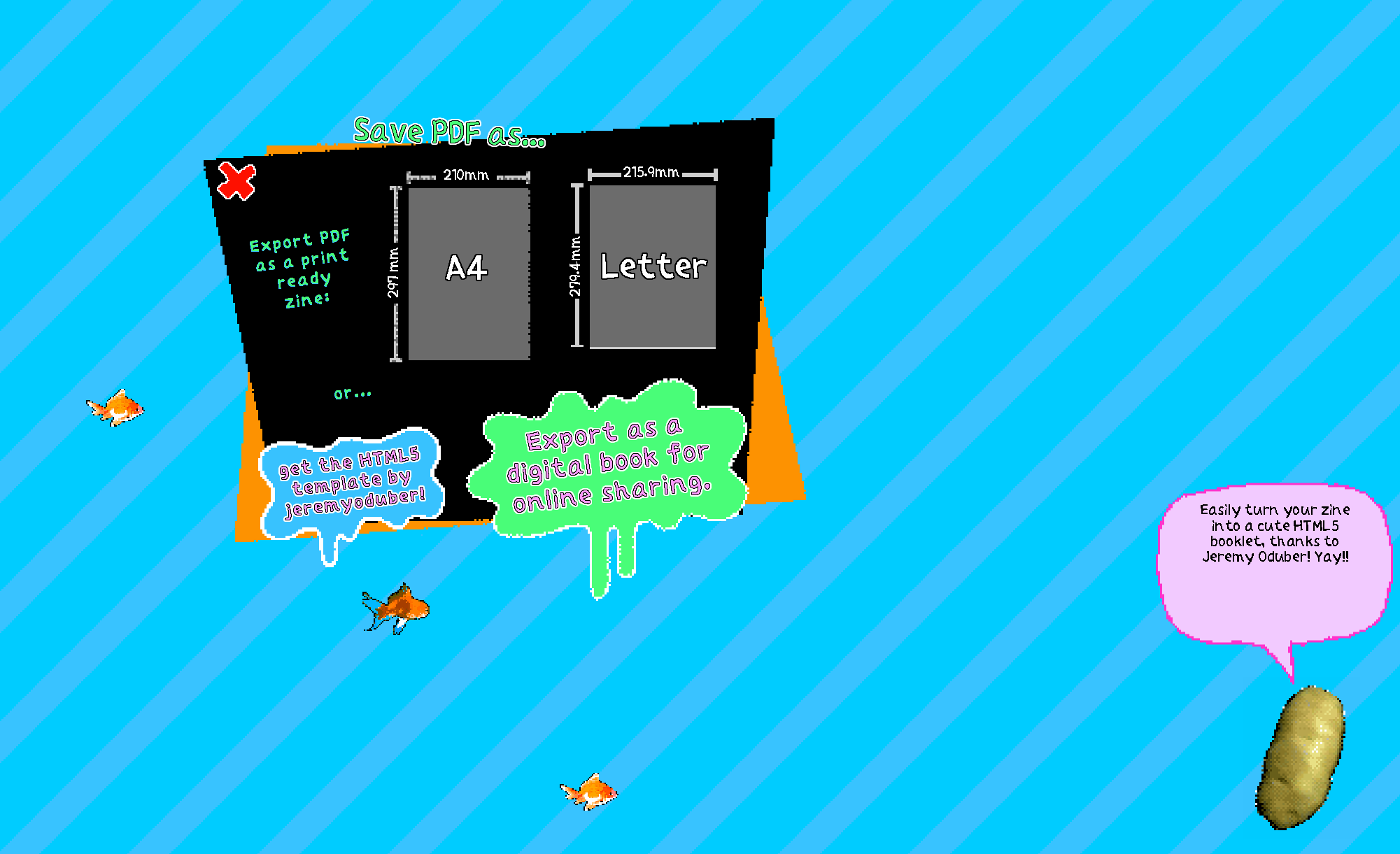 A while ago, Jeremy Oduber built this wonderful template to turn Electric Zine Maker pages into an HTML5 book. This is a beautiful way of having an online version. It's very easy to use, and works wonderfully!
With a dedicated link inside the Zine Maker, people can find it easier.

Of course just dumping that link in the PDF screen isn't optimal. The main menu UI needs some major re-vamping and organizing. Until then, you can find digital booklet options under the PDF export screen.

Rainbow Paint is a gradient paint tool. It lets you draw gradient lines, and adjust all the gradient's values. You can select radial or linear gradients. Most of the other values adjust the placement or tiling of the gradient.
My favorite thing about this is that you can adjust the paint alpha, and get this really beautiful faint rainbow lines.
This is a colorful one!

Gif Brush is my new favorite. I didn't think it was a good idea, but thought to give it a go anyway... I'm so happy I saw it through!
With the Gif Brush you can load an animated gif, and paint with it as it animates. You basically draw with an animation. You can get some really interesting effects with this! It's a lot of fun.

Because of the advanced Fluid Dynamics integration that this tool brings, the Electric Zine Maker is now AAA software. The water physics are accurate, and react to your mouse.
With Goldfish Pro you can submerge your art in water, and splash around in it!
Treat it like it's a rain puddle. Splash to your heart's content...
Goldfish Pro offers a number of customization options for the water. You can adjust the distance (for smaller more distant splashes), the ripple size (for massive ripples), and toggle rain (so that you have lots of splashes). The mode option lets you draw (like any normal tool), or splash (a continuous animation that keeps playing).

There's also a Powered by Mackerelmedia Fish button... so you can learn more about the underlying technology behind the Electric Zine Maker.

The smudge tool now lets you update the size with the slider! Yay, finally!
You can use the default slider to change the size of your smudges.
This took ridiculously long to get to. Thank you for your patience. :)

...There where also some other bug fixes, but I wasn't keeping track of them so can't remember.

That's it for most of the new stuff...

In other Zine Maker related news, the Electric Zine Maker got a grant to fund its open source effort!
Thanks to the sponsorship in part by the Clinic for Open Source Arts (COSA) at the University of Denver, I'll be open sourcing the tools.

I'm going to start with the tools, and then release versions of the code in various languages, and then open source the entire thing when it's done (this last part will take a lot of time).
I've been giving how to best do this a lot of thought. I built the Zine Maker under the assumption that no living person will have to see the spaghetti mess that powers it... so I'm going to devote my effort to doing that properly. I'll probably also do this as I build the Zine Maker.
I'm really grateful for this grant and the generosity toward open source software.
This is a small summary. When I'm ready I'll write a longer blog post explaining things, and sharing the early open source version...

The Electric Zine Maker is a longer term project. It has grown a lot, and the expectations for it have also grown since I started. Originally I just wanted a black and white drawing tool that throws art into templates. Since I'm just one person working on it, it will take more time to do right. I appreciate the patience.
I'm aware of usability concerns, but cannot make commitments as to when and if certain things will get done. My plan for the UI is to re-visit it when the tools are done. New templates are also still coming.

My sister and Tambalaya surprised me by making this amazing trailer for the Electric Zine Maker.
The video work is by my sister, and Tambalaya made the music.
I'm in love :)

Get Electric Zine Maker (a work in progress, be gentle, hug it often)

Electric Zine Maker (a work in progress, be gentle, hug it often)

The Electric Zine Maker (⚡️📝✂️) is a printshop and art tool for making zines.