"Everything is going to be OK" update & thank you! 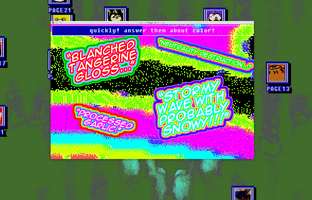 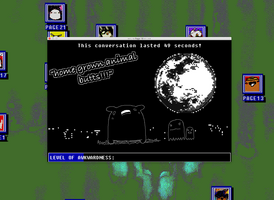 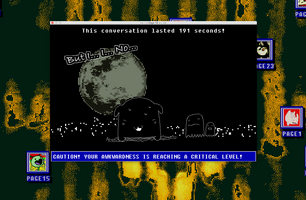 Hello kind people that originally donated to that ACLU thing! ...Or if you didn't, and you're just reading this. (I'm new to itch Devlog's, hi!) :)

To help myself financially I'm releasing this public beta of "Everything is going to be OK". Any amount, no mater how small, will help.

"Everything is going to be OK" has come a VERY long way since it was first, momentarily, made available. There are more pages, and lots of hidden things in the pages.
Another big deal is the poetry. There is lots of writing in this game. Probably too much, since I always make the assumption people don't read in games. :D ...Hmm, ok we'll see.

The game functions with layers (layered windowing). You can experience it at a "surface value", but if you dig you uncover a lot of very personal stuff, commentary, and philosophy... kind of like getting to know a person. The writing in these places is less cheerful, and more sincere (realistic). Someone called it "heavy" so I guess that's a good word.
All this is also based on personal life stories, and experiences, so it fits with what I originally set out to do.
In regards to this writing, I think a few people now thought I was trying to be too purposefully sad, depressing, or didn't like how I covered these topics? It's hard for me to relate these experiences to "normal people" because what this writing covers are topics that are NOT "nice". I mean, war for example. This is not fun, and the emotional toll isn't either.
It's hard for me to understand that you cannot talk about this in a realistic emotional sense (not glorious or entertaining), but it's ok for this same medium (games) to paint it in the picture that it does all the time...
At any rate, this is an art project. It's not exactly being made to entertain.

It's interesting... Since I first set out to make this, and wrote my first blog post announcing it, I feel like I accurately captured what I wanted to do. This thing REALLY doesn't allow the player much control/power. It's very anarchic...
The game was selected for IndieCade's E3 showcase. This was both huge, and scary for me. Scary because this is a total art game. Not really a game, but maybe, but not really... I didn't compromise anything for the sake of making something "fun" or pleasing players, in a traditional sense.
I would assume that a commercial game expo is so not the place for something like this.
The reception surprised me! Many people positively said that they had never played/seen anything like this (which was the most common comment). Many said that it was very different. Those that didn't like it said that it was interesting. Only a few where appalled.
So, my "interesting" observation that I'm getting at...
I found it fascinating how much people wanted to "be in charge". Power is a lot more important to players than I thought.
I think it's funny that some would have been appalled by the depictions of violence here when right across from where I was showcasing where large monitors of people being shot in the face (the Twitch screen). People really expect to be the one "in charge" of the violence, when it comes to games. As soon as you turn that around it's offensive and frustrating.
Power is important. Experiences that kind of subvert that, challenge it, or don't allow you that control really throw people off (in interesting ways). Some people where honestly offended!
I realize that these observations could easily bleed into the "violence in video games, yay or nay?" argument. I hate that discussion because I feel like it's a really superficial view. My interest here is taking these reactions, and trying to make it a more realistic commentary (a metaphor of violence in REAL life, survival of that violence, and transcending the violence that happened).
I was telling people that this game is more about how power doesn't come from the abuser. Power is the ability to survive the abuser, and even be able to function after that. I do cover a lot of this in my artist's statement, as well as all the blog post's I wrote while building this (the personal rants): here, here , here, here...
Ok, I feel like this is getting a bit long winded...

I discussed this much better in this IndieCade interview:

I also discussed the game in this podcast for the PlayDate game show.
(they did a series of podcasts with the various devs that participated. If you're looking for something to listen to, you may like them!)

Going forward I have about 7 more pages to finish. I may or may not add a larger game hidden inside this. I feel like if I do that + the seven pages it will make up for releasing this too early...
I'm not sure, but that last bit is an idea. There are definitely seven more pages coming!
I plan to be finished at the end of this year. I hope. If I crunch well, I can do it! :D