"Everything is going to be OK" wins the Interaction Award at IndieCade & some thoughts after showcasing it...

I'm writing this super exhausted after just returning from IndieCade (so apologies for the bad grammar) :)
I was showcasing "Everything is going to be OK" as a nominee.
The game won the Interaction Award!
It really caught me off guard because it was the first award that they announced, and also because I didn't see "interaction" coming. There where so many cool VR things there!
I do actually see that now... A lot of work was done in making interaction unique, unexpected, and subversive... They said nice things and put it in better words at the award show. :) 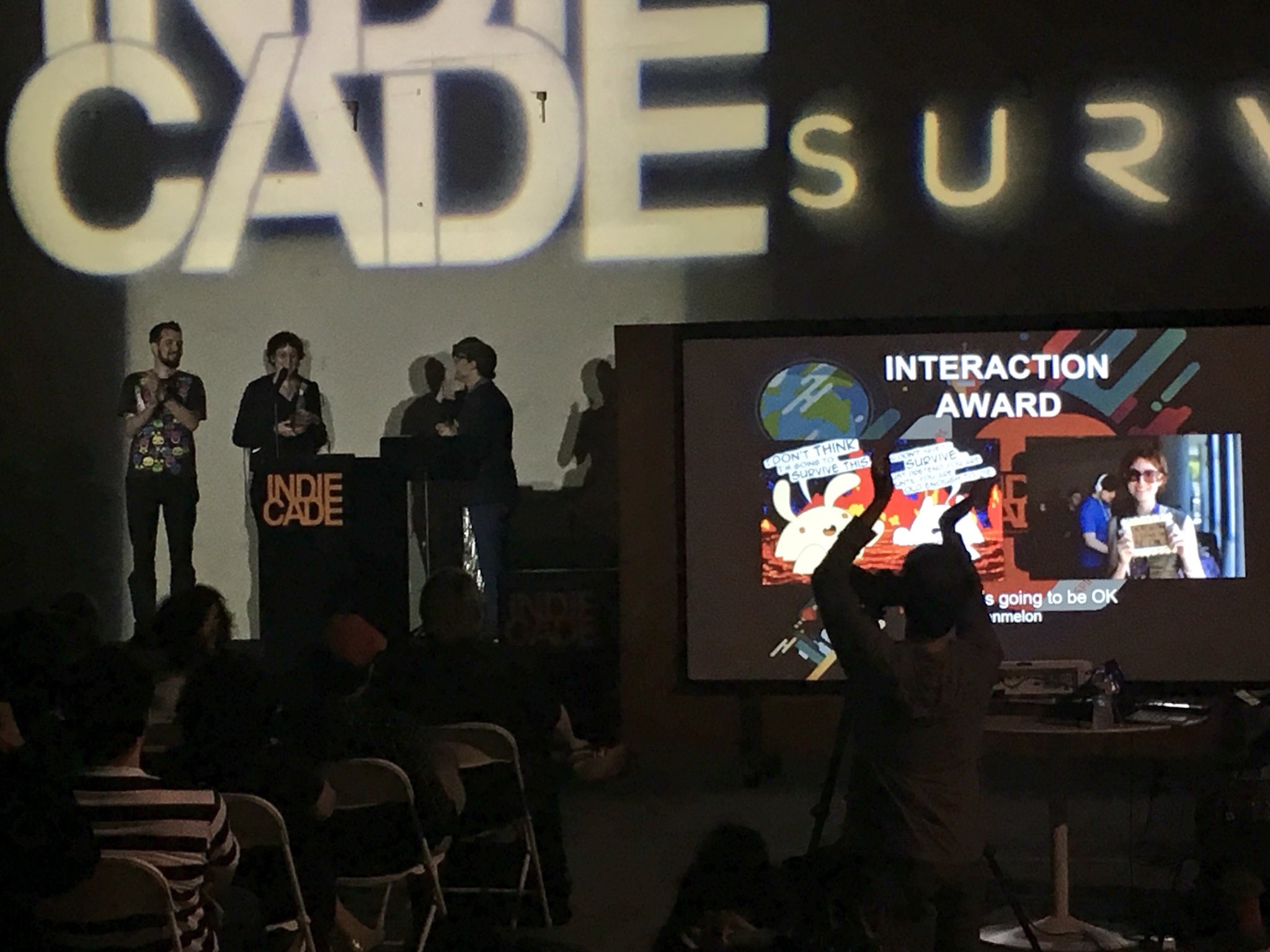 While showcasing, the reactions have been amazing. People where genuinely touched by it. The audience there was so open to something like this (not only in terms of how you have to "play" but also in regards to the message). Some people cried, or almost cried.

Many "got" the seemingly obscure design choices too. Like the "sinking in lava page", were if you choose to "encourage" the other character, the character that does the encouraging sinks. Helping pulls one or the other down, but if you evenly distribute the encouragements between them then both characters get to live at the end.
The majority (almost all) of the pages have two endings.

I'm proud of how it turned out. It's literally what I set out to make, and ended up being everything I initially envisioned (visually, functionally, and design wise).

I also have two more weeks of development left on it. It's coming out soon!

Interesting observation after talking about it with people...
My general pitch was that this is an interactive zine that discusses abstract life experiences about trauma, depression, PTSD, and struggle. It's framed in such a way that the topics are approachable. Using cartoon characters and ridiculous circumstances.
On the surface it looks like dark comedy, but as you interact it starts to unravel these topics to facilitate discussion.
It's a complex game with may reasons to exist (I feel like), but the point is to also do away with the shame of "talking about" stuff like this. Society tends to put a veil of shame over victims of traumatic experiences. It's not "cool" or "ok" to discuss it, or discuss the social circumstances that lead up to people being abused.
If you speak up you are silenced with guilt, and social ostracization. I am speaking entirely from personal experience (things that happened to me).
So I set out to make this. It's something that has been brewing for a long time, but I lacked the objectivity to do something creative with these topics in an objective and relatable way (that doesn't come off as "too much venting").
After E3, and after the game got picked up by streamers, it naturally attracted attacks. I mentioned this before, but I'm going somewhere constructive with this observation...
Because this game is so personal, and if you play it, and especially read the poetry, you basically know what I've been through. That level of vulnerability also allowed for trolls to cater their attacks in a pretty personal way.
I thought I was ready for that, but it really hit me like a freight train. It took some introspection to be able to face these issues, and I did get over it, but as I was talking about this it occurred to me how this is EXACTLY a total example of why I made this game.
The whole "silencing" thing was happening again, even to this game (which is discussing that).
I guess they inadvertently illustrated my point.

It felt good to identify that. I feel like it's so important not to let artistic discussion about these topics be silenced. There's a psychology of shame surrounding "hard times", and how they are a reflection of your own self-worth, that I really want to see torn down.
This is why women are afraid of speaking up about sexism or sexual assault (I know I was). As hard as it was for me to make this/finally face these topics so I can be objective, I do not regret making this piece. It's worth it.

Overall this has been amazing. I'm really proud of what I've accomplished.
Also, there's a pretty kick ass writeup on VentureBeat/GameBeat about the game. 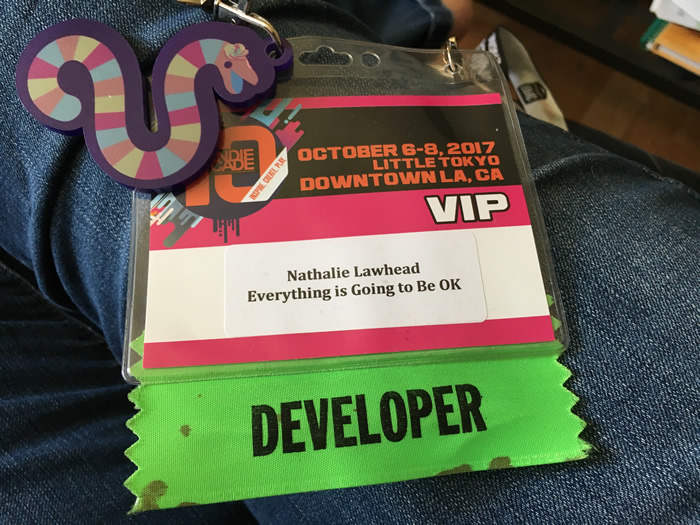 Goodbye badge with blood on the "DEVELOPER" part of it! (I fell on the train)